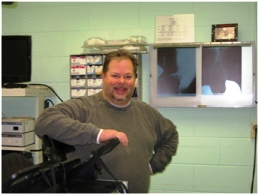 Dr. Joe Muise is Senior partner/owner and a graduate of the Ontario Veterinary College (Class of 84). Prior to attending OVC he completed a Diploma in Agriculture at Kemptville College majoring in Animal Sciences and a minor in Landscape Architecture and Design. Dr. Muise came to Peterborough in 1984 and fell in love with the area, making it his home. He became a partner at Peterborough Pet Hospital in 1985, taking over as staff surgeon.

Dr. Muise holds membership in the Ontario Veterinary MedicalAssociations, and continues to keep abreast with the latest surgical techniques. He has acquired numerous Certifications in surgery and has in excess of 29,000 hrs in the surgery room.

Dr. Muise has a passion for minimally invasive surgical techniques and was one of the first to introduce and perform Laparoscopic Ovariectomy in private practice in Canada. He has performed over 500 lap ovariectomies to date. 90% of Canine spays at Peterborough Pet Hospital are now done by laparoscopy as well as Cryptorchid and Gastropexy surgeries.

Dr. Muise has two children, Rachel and Michael, and two grandchildren. In his spare time Dr. Muise enjoys crusing on his Harley Davidson, boating and pursuing his passion for Scuba Diving. He holds current license as a certified SDI Dive Master. He also spends time at his Alpaca Farm/Fiber Mill with his partner Barb, three dogs, a special cat named Binx ( f1 Bengal hybrid ) and a herd of 65 Alpacas.

The farm produces Alpacas fleece which is then sent to their on-site Mill facility and transformed into knitting yarn, felt, sweaters, socks, hats and a number of other products for sale in the farm store.